I’ve been thinking a lot about Tarot and herb correspondences ever since Monica over at Tarot in a Teacup started using her Herbal Tarot deck. I can’t say I care for the art in that deck all that much and don’t have it in my collection. Anyway, that aside, I was very intrigued by the idea of matching up herbal correspondences after reading some of Monica’s insights. So lo and behold I found a deck that has some very NICE artwork that I really like, although it’s an oracle deck of 36 cards, rather than a full 78-card Tarot deck. It’s the Druid Plant Oracle, and the art is by Will Worthington who also illustrated the lovely new Wildwood Tarot. It pictures herbs and plants commonly known during the time of the Druids, (with the possible exception of Mandrake which was imported). The book is written by Philip and Stephanie Carr-Gomm. The cards are large at 4″x5 13/16″, the stock is pretty standard. 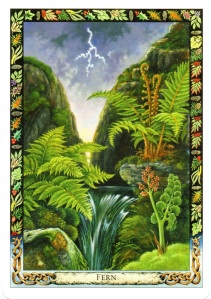 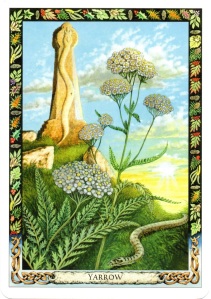 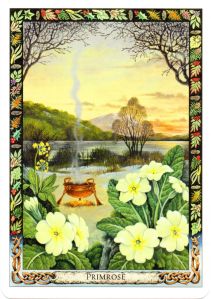 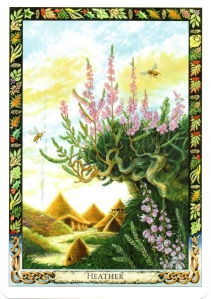 Since it’s a smaller deck, I think I can’t show too many of the cards here, but they are all very beautiful. I’m a real fan of Will Worthington’s style. As with the Wildwood Tarot, the backgrounds are illustrative of Iron Age Celtic settlements.

Only one card, The Restorers, depicts a human figure. In addition to the illustrated cards, they included three blank cards (I suspect this is due to the nature of the layout for printing, and rather than throw away the excess, they included them, printed with the decorative borders and colored backs, for those who are artistically inclined and wish to add some of their own.) The book gives three pages on each card. There’s a description of the card, reading points, and some lore and history of the herb. However, it’s not much info per card really, and what lore is given is centered on the Celts and Druids. If you want some more depth you’ll need to accessorize with a good book on herbs (Scott Cunningham published a couple, Paul V. Beyerl’s A Compendium of Herbal Magick is fairly extensive, any dictionary of herbs or book on herbal medicine would do. Also, some Web sites that have a good bit of information are Mountain Rose Herbs and Botanical.com, even Wikipedia).  In the back there are spreads, and an index of the cards in table format listing the common name, Gaelic name, botanical name, Keywords Upright, Keywords Reversed, and the page number the card is on. The authors also note in the book that the cards are the same size and shape as those in their Druid Animal Oracle, so if you wanted to you could combine the two decks. I don’t have that one (yet, at least) but again the art is by Will Worthington and I may go ahead and get it. I find his renditions of plants and animals detailed and very fine.

What do you think? Cancel reply

This site uses Akismet to reduce spam. Learn how your comment data is processed.