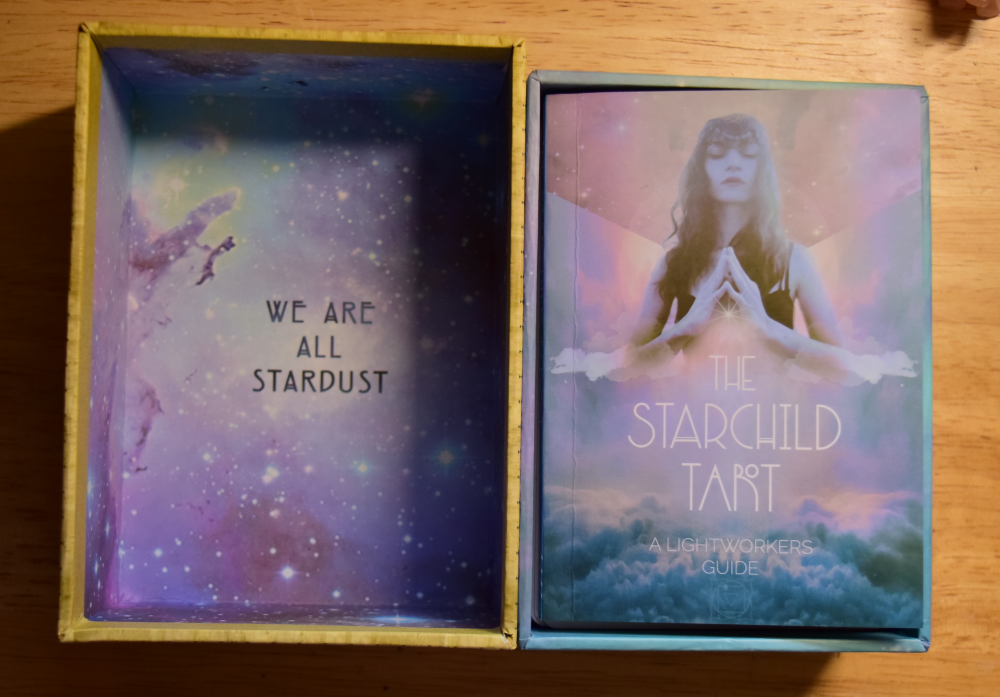 I’m not sure how I ran across this deck. As usual I was probably just searching for Tarot decks and ran across a picture of it. This is The Starchild Tarot by Danielle Noel (as you no doubt surmised from the photo).  The artist/creator self-published it in 2014, but since I’ve had to back off the collecting the last couple of years, I sort of stopped paying attention to new decks so I wouldn’t be tempted. I wasn’t sure at first what I thought of it, but I found I kept going back to the site and looking through it again, which is kind of surprising because I’m not typically drawn to the pinks and purples. But something about this appealed to me like the Connected and Free Oracle, and the Whispers of Healing Oracle decks. I am drawn these days to the more uplifting decks, although I still shy away from the ones that are nothing but affirmations. I expect like most Tarotists and deck collectors I go through phases when I’m only interested in, say, antique decks, or Thoth-inspired, or something pagan-oriented. There will always be room in my heart and my collection for a wide variety. I feel I get different messages from different decks, which I think is a pretty common sentiment among readers. Depending on our mood, or the issue at hand, we are drawn to a certain type of deck, as if instinctively knowing which artist’s vision will give us the clearest answer.

And these days I’m longing to deepen my practice, and find my connection to the All, the Universe, whatever you wish to call it. Have I found it in this deck? Time will tell, but I think I’ve found something that’s going to help me in the direction I want to go, the direction I feel pulled toward.

This deck has been created for the mystics and seekers who wish to connect with their own inner dreamscapes and seeded wisdom, as a way to further unlock their intuition and light. It is a tool that is also dedicated to healing and awakening, offering a gentle yet honest approach to the keys of the Tarot. Inspired by sacred symbology, the Akasha, and the fabric of our universe, each card functions as a tiny gateway into new worlds for you to explore.

The color palette is steeped in pastels, heavy on pinks and lavenders. My scans don’t do them justice. They are much softer in reality than I could manage to show. The cards show alien landscapes, lots of moons and other celestial bodies, and people in otherworldly settings. The box is a two-part lift-off, and very sturdy. The cardstock is excellent, heavier than standard decks. The deck seems to come in two sizes, a traditional size, and the large Akashic version, which is the one I got. I’m very glad I did, I like larger cards, but if you have smaller hands you’ll find it challenging to shuffle.

The book has a fair amount of information. There are four spreads, basic info on the suits and Tarot in general, but also info on chakras, symbols, guides, gemstones, and astrological correspondences.

The deck is edged in a kind of matte gold. There is some sheen to it, but not like some decks. I think it matches the subdued colors better than a very shiny gilding would. 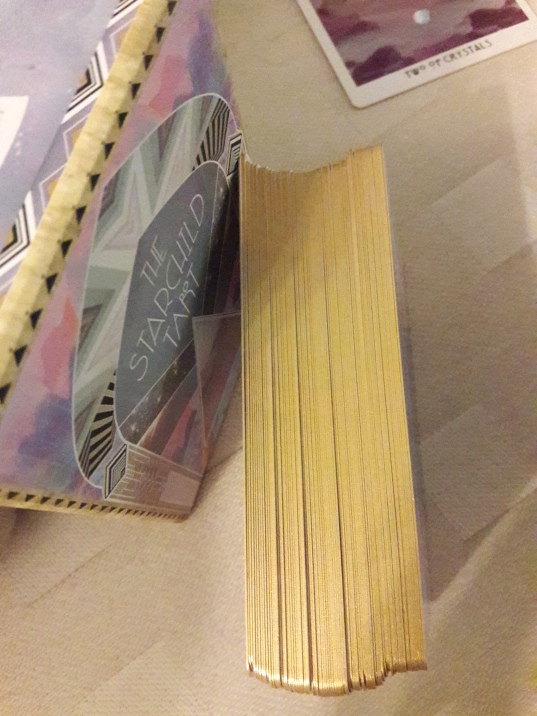 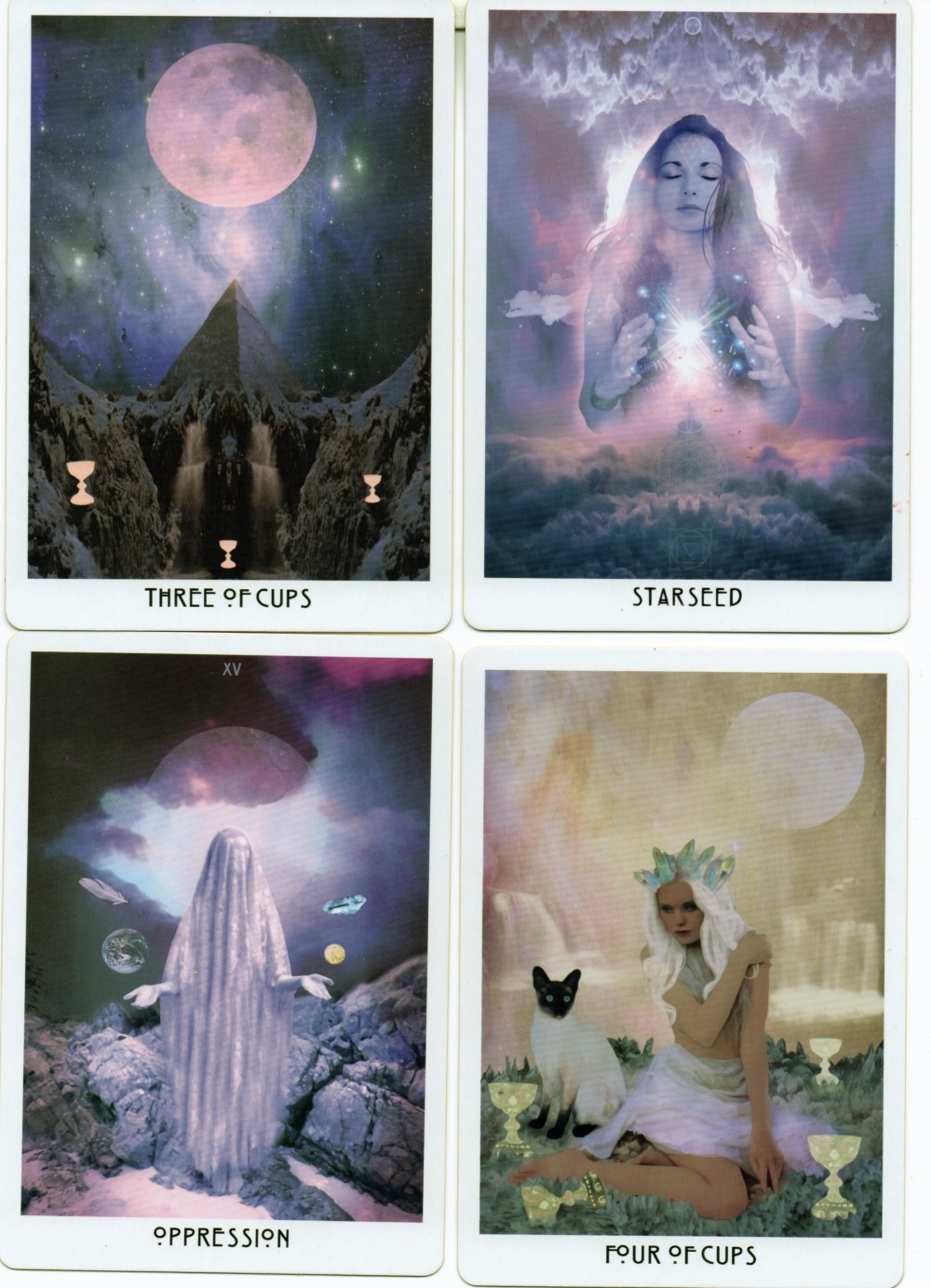 Starseed is the first card, the Fool of this deck. Some of the other cards have also been renamed: The Devil is Oppression here, Judgement is Awakening, The Hanged Man is Perspective, The Hermit is Serenity, Death is Transformation. Justice is 8 and Strength is 11, if you care. Pentacles are Crystals in this deck, but the rest of the suits have their traditional names of Swords, Wands, and Cups. 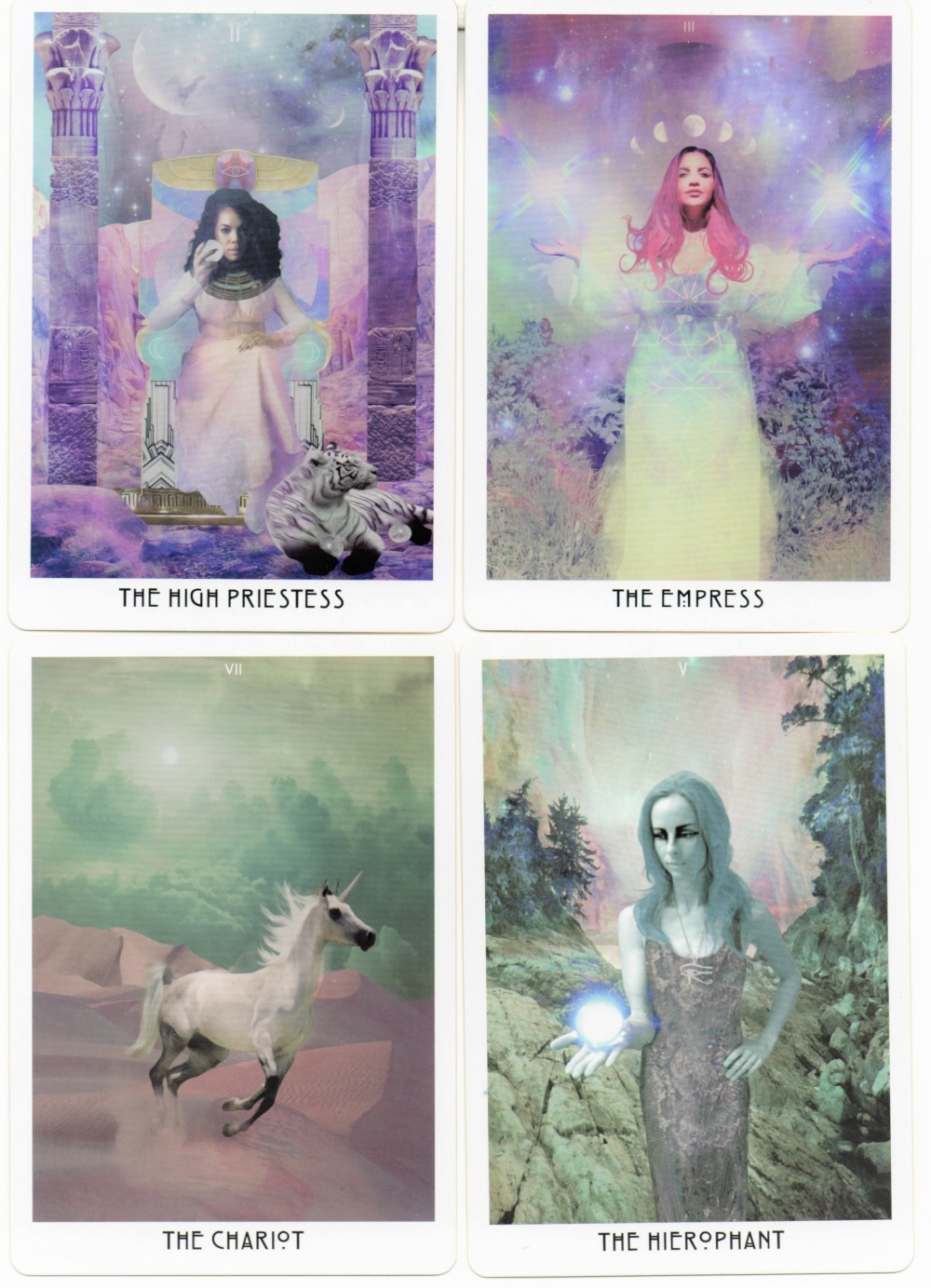 As you can see, the art is unique. The figures are mostly women, including one of the Knights and all the Pages, The Magician, and even the Hierophant. The Emperor shows a lioness, rather than a maned male lion. 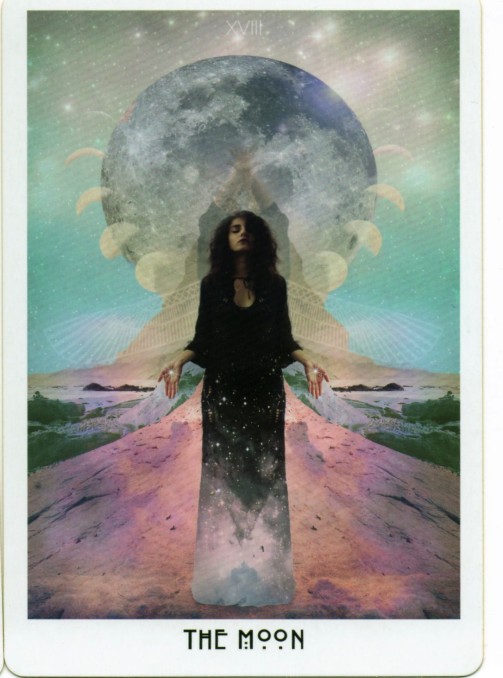 There’s a lot of sacred geometry subtly done in white in some of the cards. On some it’s nearly invisible but look for it, it’s there.

So I pulled a card for myself last night, kind of a get acquainted card, see what the deck wanted to tell me upon arrival. I pulled the King of Cups, and I think it’s telling me this will be my guide through this deck and on the next phase of my journey. The King of Cups rules with his heart, and his head, The book says, “This person is very self-aware and offers positive counsel and advice to others.” 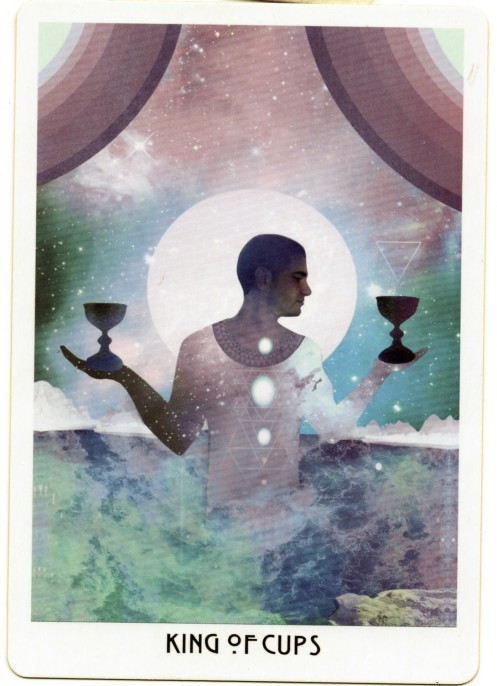 Seems like a good beginning. The sister to this deck, The Moonchild Tarot, is in pre-order now on the artist’s website. I think I’ll be going back to add that one to my collection as well.

What do you think? Cancel reply

This site uses Akismet to reduce spam. Learn how your comment data is processed.